This route shares most of the ascent with Miketi Mountain, one of the most distinctive mountains visible from almost all of Gudauri Ski Area. Coming down from Gudauri towards Mleta, turn right on the last switchback onto a gravel road that follows the Aragvi River upstream.

4km down this road, the hike starts with a river crossing. Depending on the conditions, it may be possible to jump from rock to rock or you may have to get your feet wet. It’s a good idea to bring garbage bags to put over your feet for the river crossing so that you don’t have to take your boots off. Ascend up and slightly left up to the first ridge, into a hidden valley, and follow that valley until you turn left to ascend up to the saddle between Sheli and Miketi mountains. Miketi looks much more impressive from a distance, but Sheli is north facing and is way too often overlooked.

At the saddle, turn left to complete the short remaining ascent to Sheli. From here, there are hundreds of lines to choose. Be aware of the steep gully at the very bottom of the slope which can be a dangerous terrain trap, so as you near the bottom, make sure to cut left back to the skin track or cut right to where the gully is wider. Hike back up a small amount to the lower ridge and then more or less follow the skin track back to the river.

Note that this route is frequented by heliskiers, so it’s a good idea to coordinate with the helicopter company to make sure you don’t have a group dropping above you. http://heliski.travel/ 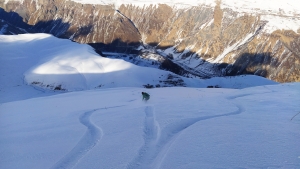